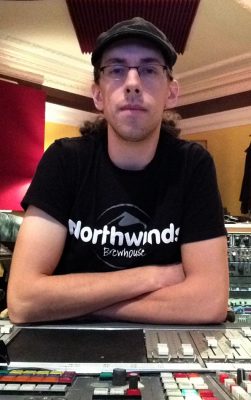 As the man behind the mixing board at Sonic Temple Studio in Halifax, audio engineer Darren van Niekerk brought Femoir’s 14 tracks to life.

When and why did you first get involved with music?
I’ve always been surrounded by it. My Dad is a guitar player and singer with the church choir, and when I was growing up, he owned a record store that shared a space with a musical instrument store. I’d go in to “help out” when I was a kid so I could monkey around on all the keyboards they had in stock. When I was 10 Dad showed me a few chords on the guitar and that became my obsession. Fast forward a few years and I had dropped out of Aerospace Engineering at Ryerson University, returned home and was about to chase my girlfriend from our band out to Nova Scotia where she had applied to MSVU when I decided I needed to find something to do with my life once I got there. I wasn’t confident enough as a guitar player to chase that dream professionally so she asked if I’d ever considered the studio. I applied to Nova Scotia Community College, got my work term at The Sonic Temple, married the girl, and the rest – as they say – is history.

Are they the same reasons you do it today?
I guess so, yes. Music was the only thing I wanted to spend my time on. It was one of the few things that felt natural and comfortable to me, tapped into an energy that I didn’t find anywhere else.  It still is; when you lock in with your clients and that energy comes out, it’s an unmatched high.

What are the challenges of the vocation?
I think working with people. I’m a very shy person by nature, but I do enjoy this. You work with so many different personality types, often during the same session. It’s important to be able to connect on some level with everyone around you in that space, keeping everyone’s energy drawn into the creative circle. Also, maintaining your cool, which I think I handle well enough! Particularly when working in a studio built around vintage analogue equipment, things don’t always go as planned or things break down. And this also bridges back to the different personalities, learning how to work with the difficult ones as well, because we all have our quirks! I need to keep the ball rolling and make sure the upsets don’t become upsetting. Life happens, sometimes you just have to make sure to flow through it all so the clients stay comfortable and inspired. And after all that, just being a dad – I have 4 children at home, some with higher needs and work in an industry that demands so much on a personal level in terms of time and energy that it’s hard not to drop a ball now and again with that kind of juggling act.

What are the rewards?
When you’re in a session with a bunch of capable and inspired musicians and creativity starts flowing, time disappears. And it becomes so personal when you share these experiences with the artists – I feel like I leave the studio having created something beautiful with friends. It’s a connection that stays with me and fuels the next projects that come through because the experiences shape you on both a professional and a human level.

What have been some career highlights?
There have been so many; recording drums for Bryan Adams (we still have his toaster!), recording strings for K-Os, working with and learning from respected producers like Don Smith, Tony Doogan, Gavin Brown, Eric Ratz…Tony and Eric – in separate phases of my career for each – ended up feeling like mentors, as I had the opportunity to work on several albums with each. They were great opportunities to steal all their tricks! Their individual styles though both felt in tune with what I wanted to bring out in my own work going forward as an engineer/producer, so I have a great deal of appreciation for the time I got to spend with either of them.

How was your experience with the Femoir project?
Thoroughly enjoyable, inspiring. The musicians chosen for the project were all such amazing players and really wonderful humans to be around in the studio. How easily they all worked together, fed off one another for ideas and inspiration, and how well they locked in to bring it all together on a take honestly makes for some of the most memorable moments in any recording career. I quickly discovered early on that this was my favourite way to record, and this project fit the bill pretty nicely! 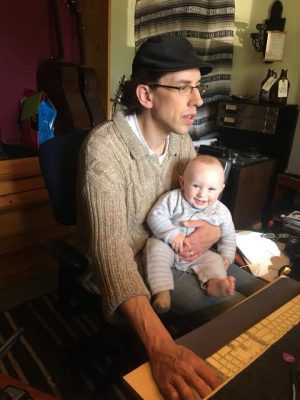 What stood out to you?
There seemed to be a great deal of clarity with what Karen intended to do with the album, how she wanted the music to be conveyed emotionally to how the ideas and concepts within the music would be flow into the imagery, the marketing, the promotion…ideas and inspiration were invited, but the intention of the album was always kept forefront. It was a wonderful process to see unfold.

What makes a good song?
Haha! This is so subjective to me. There are songs with beautifully complex arrangements, sonic and harmonic textures and deep multifaceted lyrics that draw me in but go over other listener’s heads…Then, there are songs with no apparent depth, no real complex meaning or structure, but something in them – be it rhythmic, a quick lyrical hook, a barrage of guitars – grabs you, digs in to you and forces you to listen because it “just feels right”. A good song grabs you and transports you in some way, and that’s so personal. I think that’s beautiful.

What are your thoughts on the current state of Canada’s music scene?
I’m not sure I have a formal opinion on it as I’m not sure I’m up to date enough on it all! I mostly see so many of us chomping at the bit to get up and going again, to get out and live again, make a livelihood out of it again…One thing I can say, watching the money dry up, the sales dry up, the shows disappear…it was inspiring watching artists take to their online communities to keep creating something, keep engaging with fans and people in general. It was beautiful to see the will to survive and the desire to create bloom out of something that looked so bleak. That obviously goes beyond our own country to the rest of the world throughout these last 19 months or so, but it was beautiful watching how our maritime artists not only pushed through this particular struggle but also how they helped push others through. To me it drove home a sense of community that binds all of us together. I’m very interested to see what Canada’s music scene becomes on the other side of this.

What’s on your agenda for the rest of 2021?
Balance. Being a father of 4 and largely being the one responsible for the home front, I’ve decided to build out my facility at home to accommodate small recording projects. I’ll still be on deck at the Temple for projects, but this gives me some options post-Covid (whenever the hell THAT happens!) to get back into what I love doing most now that everyone is in school while still being able to be the at-home parent as much as I can for them. Balance.