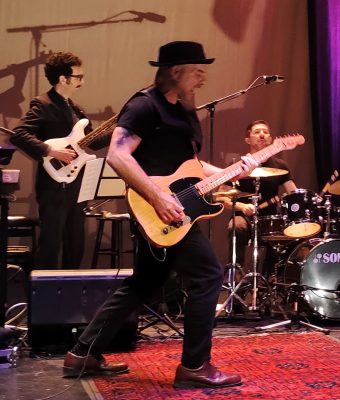 What are your own roots?
Je suis Montréalaise. I started playing guitar as a teenager, inspired by punk and metal. My tastes and playing have both evolved over time, and these days I listen to everything. I can’t play everything, mind you…lol…but it is fun and exciting to stretch out as a player.

Who are your favourite guitarists?
There are so many that I love and listen to – Jeff Beck, Hendrix, The Edge, Marc Ribot, Prince, St. Vincent, Carlos Santana, Jimmy Page, Tom Morello, Buddy Guy, Frank Zappa, Johnny Ramone, Jack White, Ani DiFranco, Joe Walsh, Keith Richards, Jonny Greenwood, Thurston Moore, J. Mascis, Sister Rosetta Tharpe, Duane Allman, Andy Summers, Joe Perry, John Frusciante, PJ Harvey, Johnny Winter…these may seem all over the place stylistically, but there is a thread that weaves them all together; feel, guts, and soul. If I had to choose one, however, it would be Pete Townshend. No one has ever used the guitar so masterfully to craft and orchestrate music.

What guitars did you use for Femoir?
For the electric stuff I used a ’75 Gibson Les Paul Deluxe for the heavier tones, a ’76 Fender Telecaster for the lighter edges and a 2012 Squier Telecaster for the stuff in between. There is a 2016 Gibson Les Paul Standard on there also, as well as a ’78 Gibson Firebird. The acoustic parts were done with a 2009 Takamine SE – a stunning instrument with rich and robust tones. For amps I varied between a Fender Blues Deluxe and a Marshall Class 5 – both are tube-driven and bring extra warmth to the album. For effects, I kept it simple with only a Boss Blues Driver and an old, well-worn EH Memory Man.

What other guitars are you playing these days?
My main guitars are a pair of Gibson Les Paul Traditional models – one is ebony, the other is a Bourbon Burst. Along with the ones I listed in the reply above, I also play a newer PRS hollowbody, a newer, modified Fender Stratocaster, an older Ibanez hollowbody, an older Epiphone Sheraton II, a Gibson Hummingbird acoustic, and a few others.

How essential was the guitar to the writing and recording of Femoir?
It was important in terms of the structure and architecture of the songs. I think it was Bruce Springsteen who said that if a tune can stand on its own with just a voice and a single instrument then it will stand the test of time. So, the original songs on Femoir were crafted on an acoustic guitar and then ornamented with the other instruments, like flesh over a skeleton or leaves upon a tree. Really, a lot of what I ended up doing was about getting out-of-the-way – allowing the songs to breathe on their own. That is something that I learned over time – when not to play. As Miles Davis said, “music is the space between the notes.” 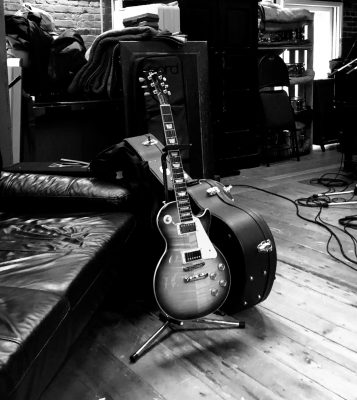 What was the process like for you?
Along with being incredibly professional, Karen is very personable and made all of us feel welcome and a part of the project. She knew what she wanted but gave us the space to do our own thing. Because of that, each of us was able to bring a unique voice to the recording. Make no mistake, however, it was Karen’s vision that brought the whole thing to life – Femoir is her baby.

What has it been like playing with her new band?
Awesome. Mitch, Chris, and Nick are great guys and incredible players – they bring a dynamic and uniquely creative mix of experience, energy, and enthusiasm to the songs.

Do you have any advice for younger guitarists?
Play. Play for joy and for yourself. The only guitarist you must be better than is the guitarist you were yesterday. And listen – not just to other guitar players but also other great musicians. A real turning point for me as a player was reading Zen Guitar by Philip Toshio Sudo, which is a must-read for any musician. The revelation was that I didn’t have to be the best or flashiest player out there, or sound like anyone else – I only had to be myself and be true to my own voice.